Five Views on Law and Gospel


Click the Internet Zone. If you do not have to customize your Internet security settings, click Default Level. Then go to step 5. Click OK to close the Internet Options popup. Chrome On the Control button top right of browser , select Settings from dropdown. Under the header JavaScript select the following radio button: Allow all sites to run JavaScript recommended. Gundry , Greg L. Bahnsen , Walter C. Kaiser, Jr. Kobo ebook September 21, Prices and offers may vary in store.

Select Parent Grandparent Teacher Kid at heart. Moo Overall, every writer was very considerate and kind to the other writers, yet appropriately critical in an academic context while evaluating their differing views. With that being the case, the reader will learn a lot about how different perspectives of the Law and Gospel are understood within the large umbrella of orthodox Protestant Christianity.

However, after reading through the book, here is a summary of my findings with each author and their corresponding view: -Non-Theonomic Reformed View - William A VanGemeren VanGemeren presented "basic" reformed doctrine but not with the best writing of it. He was a little confusing and hard to follow sometimes, kind of "eh" on the hermeneutics, and not very clear in his presentation.

He definitely did not make any clear case why non-theonomic reformed view should be adopted over against the theonomic reformed view. And he had little to offer when critiquing other views. Bahnsen Bahnsen gave a solid presentation of the Theonomic View. His article here might actually be one of his best summaries of the how and why of theonomic doctrine while for a full view - I highly recommend his By This Standard or better yet, his even more comprehensive work Theonomy in Christian Ethics.

As always, Bahnsen was very sharp in critiquing other views, and did so graciously. It is interesting to note though that probably the more powerful arguments in critiquing the other non-theonomic views came from Walter Kaiser.

Bahnsen did a good job, but Kaiser did even better in the critiques. This was really an amazing presentation.


Kaiser used up the least amount of space, wrote very clearly, and got his point across very persuasively. In his presentation he would consistently try to show that both the ceremonial and civil laws have passed away, while the moral law abides OT continuity. But every time he proposed that idea, the Scriptures he referenced only pertained to the ceremonial laws. So…he really never gave Biblical credence to the idea that the civil law is now non-binding. With the exception of the theonomic position, in his critiques it would be difficult to say with certainty that he is not a theonomist.

Kaiser demonstrated a high regard for the Old Testament Law and a confident view in its continuing abiding character.

His critiques of other views were probably the most powerful, succinct, and persuasive of all the other writers. Strickland While it was an interesting read, I was quite unimpressed with Strickland's presentation of dispensationalism. Throughout his article he contradicts himself e. I love the man as a brother in Christ.

But this was just not a great representation of what "Dispensationalism" teaches. His presentation seemed very confused; and I think there are much more able scholars out there who could have better represented it - Charles Ryrie, Stanley Toussaint, etc. But other than that, there wasn't a whole lot he brought to the discussion.

Moo While Moo is unarguably an amazing Biblical scholar, his presentation here of non-continuity between the testaments was not able to stand up against the continuity positions posed by Bahnsen and Kaiser. He wrote well, but his arguments were just not persuasive enough in light of the rest of the book. The same would go for his counter-arguments. Overall, I really enjoyed the book. It's a great reference to different understandings on how protestants view the relationship between law and gospel and a great display of academic interchange among protestant brothers.

Even if the reader like me will not fully come to agreement with any of the views proposed, these essays contain a wealth of exegetical notes and theological reflections that should aid personal contemplation of this issue when reading and studying the biblical text. Bahnsen's essay arguing for a theonomistic approach is very thought-provoking even if the thesis is unconvincing. Both Kaiser and Moo argue their cases compellingly, their respective strengths as Old Testament and New Testament scholars come to the fore. If Zondervan would ever consider updating this volume then a New Perspective contributor could add value, especially as the law's boundary markers were either downplayed or just completely dismissed in much of this volume.

Personally I think that a synthesis between the strong aspects of both Kaiser and Moo combined with relevant insights from the New Perspective will probably get us close to a system that rightly orders what Scripture teaches about the Mosaic Law's role in the life of the New Covenant believer. View 1 comment. Apr 27, Martin Beamer rated it liked it. The book was a bit disappointing. First, the structure was not well done.

Each author, it seemed, was allowed to go in any direction with the law and gospel.

Many times the authors didn't even talk about the same texts. There was no real structure to the arguments in a systematic way where the reader could really understand the differences between the positions. Second, and tied to the first, it was not written in a reader-friendly manner. In nearly every essay the arguments were so hard to follo The book was a bit disappointing.

In nearly every essay the arguments were so hard to follow and there was so much implicit nuance that it became impossible to keep up with. I'm not sure if this book was designed for non-seminary students to read or not, but I'd never recommend someone in the church to read it. You leave the book with more confusion than clarity.

However, for a seminary student or someone who desires to be an elder, I can see the book having a positive effect. I don't regret that I read it and it did make me think. For that reason I'd only recommend it to a very select audience. Overall, I found the book a much needed book as non-evangelical positions in regard to the Law and Gospel are being formed and propounded heavily now.


The occasion seems proper now for an understanding of the evangelical positions on the issue. In the book, five overarching views are presented and then debated. In this first point in regard to the work seems to be the greatest weakness of the book. Although 5 views are presented, really only two major viewpoints are being espoused viz.

This is not a substantial problem, but it seems that within the two categories, only slight variations exist. For example, within the continuity side of the spectrum, Bahnsen adds application of the Civil Law and Kaiser subtracts the Covenant of Works.

No real earth-shattering differences seem to this reviewer to exist between the three views besides these points. On the discontinuity side of the spectrum, the differences seem less clear. On some levels, Moo seems to attempt to differentiate himself from Strickland, but on the whole seems to promote a theology that identifies with the dispensational model with only nuanced differences.

All of the writers were knowledgeable of their topics and wrote quite well, and the debate was also well done. Overall perception of the writers is as follows: VanGemeren presents more of a Systematic approach rather than Dogmatic. He is criticized by his colleagues on this.

Although such an approach is to be commended it did not fit well in this work. He should have focused more on laying our a defense for his system of theology rather than trying to give a comprehensive outline for the doctrine. Bahnsen seems very assertive. 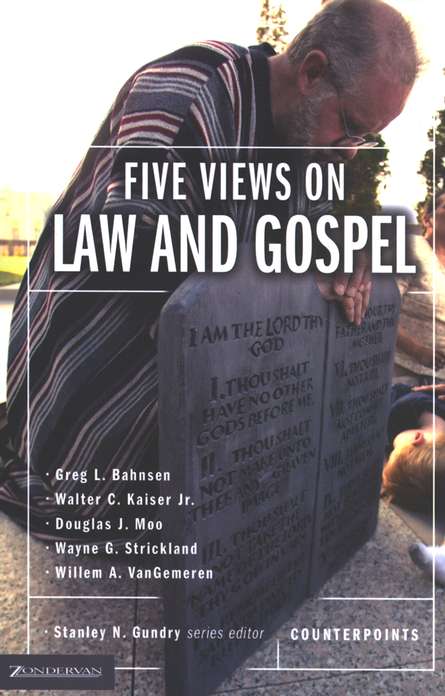 Overall his approach adds life to the debates as he fires strong attacks against his colleagues' positions e. His position seems to be helpful, but overall it seems to be a slightly less potent position on civil law than some of his Theonomic brothers as is also stated by the other writers in the work. Kaiser is ever the OT theologian's theologian. His writing brings much to the book, but, unfortunately, gets lost in the mix. The reader will struggle to discern clear differences between Kaiser's position and the Non-Theonomic view.

In reality, only nuances seem to exist, with the only major exception of Kaiser's implicit denial of the Covenant of Works. The description of the position is practically useless as all 4 other views would agree with the statement.

‎Five Views on Law and Gospel on Apple Books

With the exception of the theonomic position, in his critiques it would be difficult to say with certainty that he is not a theonomist. Kaiser demonstrated a high regard for the Old Testament Law and a confident view in its continuing abiding character. Dispensational View - Wayne G. Throughout his article he contradicts himself e.

I love the man as a brother in Christ. But this was just not a great representation of what "Dispensationalism" teaches. His presentation seemed very confused; and I think there are much more able scholars out there who could have better represented it - Charles Ryrie, Stanley Toussaint, etc.

But other than that, there wasn't a whole lot he brought to the discussion.